When we retell the story of our flight from Egypt, we come to appreciate all those who have been refugees and fugitives. The oldest standing synagogue in North America was built in 1763 in Newport, Rhode Island, by Spanish-Portuguese immigrants, descendants of persecuted Marrano Jews. They had come to America so they could, for the first time in generations, openly practice their Judaism in their new home. In the center of the synagogue, under the  Bima, they built a special hiding place, as a lesson learned from their many years of persecution and their undercover Jewish practice. For 100 years the congregants retold their story and passed on the secret of the underground shelter.

Thankfully, Jews have never had to use this hideout. But there were other people who came to the synagogue in search of a hiding place, on their way to freedom from oppression: In the years preceding the Civil War and the emancipation of slaves in the United States (1863, 100 years after the synagogue was founded), many slaves were smuggled from the South to the North, on their way to safety in Canada. The Jewish community put their synagogue and its underground hiding place at the disposal of the refugee slaves, fugitives from injustice, on their way to freedom. In this way they gave a renewed interpretation to the  mitzvah :

"If a slave has taken refuge with you from his/her persecutors, do not hand the slave over to the master. Let the fugitive slave live among you wherever s/he likes and in whatever town s/he chooses. Do not oppress the slave." (Deuteronomy, 23:15-16)

Justice Shall You Pursue Image 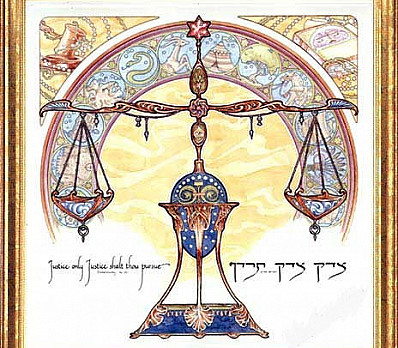 A Woman Leads Us out of Myztrayim