We place a Seder Plate at our table as a reminder to discuss certain aspects of the Passover story.

Matzah is the unleavened bread we eat to remember that when the Jews fled Egypt, they didn’t even have time to let the dough rise on their bread. We commemorate this by removing all bread and bread products from our home during Passover.

The fifth ceremonial cup of wine poured during the Seder. It is left untouched in honor of Elijah. During the Seder dinner, the door is briefly opened to welcome Elijah.  In my family, that is when a cousin jumps out and scares the little kids opening the door while the adults drink the wine left for Elijah - and convince the already terrified kids that Elijah drank it.  If Elijah does show up at your seder, remember to keep him 6 ft away.  It's unclear how many houses he's been to.

To honor Moses' sister, Miriam, a cup filled with water and placed next to Elijah’s cup. Legend says that a well of water followed Miriam.  The tradition of Miriam’s cup is meant to honor Miriam’s role in the story of the Jewish people and the spirit of all women.

by Staci Macklin
Maror  – The bitter herb. This symbolizes the harshness of lives of the Jews in Egypt. Charoset  – A delicious mix of sweet wine, apples, cinnamon and nuts that resembles the mortar used as bricks of the many buildings the Jewish slaves built in Egypt Karpas  – A green vegetable, usually parsley, is a reminder of the green sprouting up all around us during spring and is used to dip into the saltwater Zeroah  – A roasted lamb or shank bone...
-- Ten Plagues 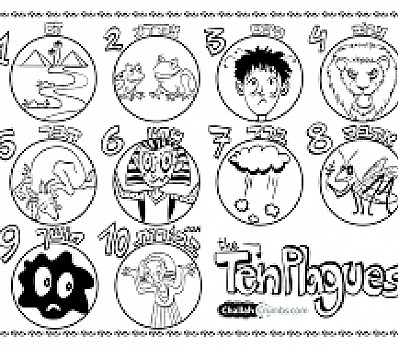