(The family is seated around the table)

LEADER: We are about to begin the recitation of the ancient story of Israel's redemption from bondage in Egypt. The purpose of this Seder is to afford us the opportunity to recall the dramatic and miraculous events which led to the exodus from an ancient land of slavery. Young and old should gather on the eve of Passover, in order that we might relate to the children, and to all, this thrilling chapter in the history of our people.

LEADER: (Points to Seder Plate) We have before us the Seder Plate. On it have been placed the main symbols of this Service.

PARTICIPANT: First, we have three, MATZOS, commemorating the bread that our ancestors were compelled to eat during their hasty departure from Egypt. Traditionally, we use three Mazot to represent the three religious groupings of the Jewish people — Kohen, Levi and Yisroayl.

PARTICIPANT: The second symbol, often virtual, is the ROASTED SHANKBONE which reminds us of the Paschal Lamb, a special animal sacrifice which our ancestors offered on the altar of the great Temple in Jerusalem, on the Passover holiday.

PARTICIPANT: The third symbol is a ROASTED EGG, which reminds us of a second offering brought to the Temple on Passover. It was known as the "FESTIVAL OFFERING," for it was brought on each of the three Festivals —Pesach, Shavuos and Succos.

PARTICIPANT: The fourth symbol is the MOIROIR, the bitter-herbs, which reminds us of the bitterness of slavery, which our ancestors were compelled to endure and others still do.

PARTICIPANT: The fifth symbol is the CHAIROSES, made to resemble mortar, used at this time to remind us of the mortar with which our ancestors made bricks for the building of Egyptian cities.

PARTICIPANT: The final symbol is the KARPAS, a green vegetable, used to remind us that Pesach coincides with the arrival of Spring in the Northern Hemisphere and the gathering of the Spring harvest. Passover, in ancient times, was also an agricultural festival and an occasion on which our ancestors gave thanks for the earth's rich bounties.

PARTICIPANT: Four times, at least, in the course of this Seder, we shall partake of the wine, a symbol of joy and thanksgiving. The four cups represent the four-fold promise to the Israelites in Egypt: "I will bring you forth;" "I will deliver you;" "I will redeem you;" "I will take you."

LEADER: These are the symbols of Passover — echoes of the past and reminders for the present. As we partake of them, may we remember the events that they recall, and may we embody their spirit in our present-day endeavors. We shall now sanctify the holiday with the recitation of the Kiddush. Let us rise 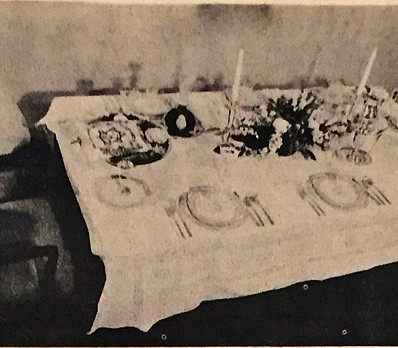 by J. Palay
THE SEDER (The family is seated around the table) LEADER: We are about to begin the recitation of the ancient story of Israel's redemption from bondage in Egypt. The purpose of this Seder is to afford us the opportunity to recall the dramatic and miraculous events which led to the exodus from an ancient land of slavery. Young and old should gather on the eve of Passover, in order that we might relate to the children, and to all, this thrilling...
Kadesh