The Torah says we are to speak these words before God and say, “My father was a wandering Aramean. He went down into Egypt and sojourned there. With few in number, he became there a great and populous nation. The Egyptians dealt harshly with us and afflicted us and imposed hard labor upon us. And we cried out to the Lord, the God of our fathers, and God heard our cry and saw our affliction and our oppression. He brought us out of Egypt with a mighty hand and with an outstretched arm and with great signs and wonders.”

We will now recount the Passover story. As we read, we will go around the table with each person taking a turn to read a paragraph out loud:

Our patriarch Abraham and his wife Sarah went to the land of Canaan, where he became the founder of “a great nation.” God tells Abraham, “Know this for certain, that your descendants will be strangers in a strange land, and be enslaved and oppressed for four hundred years. But know that in the end I shall bring judgment on the oppressors.”

Abraham’s grandson, Jacob and his family went down to Egypt during a time of famine throughout the land. In Egypt, Jacob and the Israelites lived and prospered until a new Pharaoh arose who said, “Behold the children of Israel are too many and too mighty for us. Let us then deal shrewdly with them, lest they become more powerful, and in the event of war, join our enemies in fighting against us and gain control over the region.”

God remembered the covenant that he made with Abraham and Sarah and called to Moses, telling him to appear before Pharaoh and demand that the Hebrew people be released from bondage. But Pharaoh refused to free the Israelites. Nine times Moses and his brother Aaron went to Pharaoh, and each time that Pharaoh refused Moses’ request, God sent a plague to Egypt.

After the ninth plague, Moses summoned the elders of Israel and told them to have their families mark their door posts and lintels with the blood of a lamb saying, “none of you shall go out of his house until the morning, for the Lord will pass through to strike the Egyptians, and when he sees the blood on the lintel and on the two doorposts, the Lord will pass over the door and will not allow the destroyer to enter your houses to strike you.”

It is written in the Torah that God hardened the heart of Pharaoh during Moses’ pleas. Finally when God brought down the tenth plague upon them — the death of the first-born of all the Egyptians — a great cry went up throughout Egypt, and Pharaoh allowed Moses to take his people out of the land and deliver them to a new land.

It is written: “And it shall come to pass, when you come to the land which God will give you, according as He has promised, that you shall keep this service to commemorate the Exodus. And it shall come to pass, when your children shall say to you, “What mean you by this service?” you shall say, it is the sacrifice of God's Passover, who passed over the houses of the children of Israel in Egypt.”

by Elizabeth Spring
Ex. 12:21 Then Moses called all the elders of Israel and said to them, “Go and select lambs for yourselves according to your clans, and kill the Passover lamb. 22 Take a bunch of hyssop and dip it in the blood that is in the basin, and touch the lintel and the two doorposts with the blood that is in the basin. None of you shall go out of the door of his house until the morning. 23 For the Lord...
Kadesh 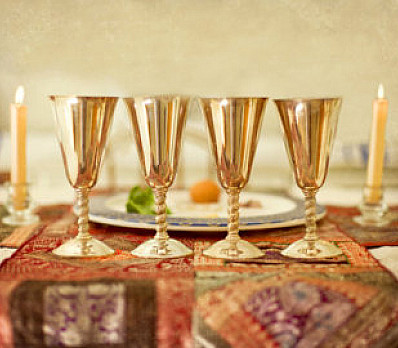 Our Exodus from Egypt 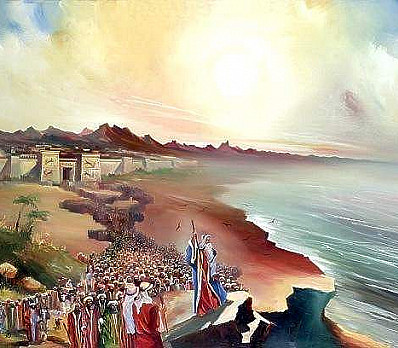