It is said that Rabbi Eliezer, Rabbi Joshua, Rabbi Elazar the son of Azariah, Rabbi Akibah, and Rabbi Tarfon sat all night in the town of B'ney B'rak telling the story of the departure from Egypt. The talked throughout the night, until their students came to them and said, "Rabbis, it is time for the morning Shema!"

Rabbi Elazar said: I seem to be a man of seventy years, yet I did not understand why the story of the departure from Egypt should be told at night, until Ben Zoma explained it by quoting this verse: "You should rememebr the day of your going our from Egypt all the days of your life." It is easy to remember your libertion when the sun is shining. But you must remember it ALL the days of your life -- even when the sun has set, even when your day is dark.

B'ney B'rak is a town localed outside Tel Aviv. The five Rabbis in this story were a group of teachers who lived under Roman rule during the second century, after the destruction of the Temple. Since the Temple no longer served as the focal point of Jewish life, the rabbis reconstructed Judaism with Torah study at its center.  Their telling of the Passover story was an act of great courage, as at the time the study and practice of Judaism was prohobited by the Romans, and was punshable by death.

by Rachel Luxemburg
All Jewish celebrations involve wine. The Torah tells us four times to recount the story of our redemption from slavery, and we will drink wine four times during the course of this Seder. There are many explanations for this custom. They represent, some have said, the four corners of the earth, for freedom must reign everywhere; the four seasons of the year, for freedom must be guarded at all times; the four empires that oppressed us in days of old, for...
Introduction

Map of the Exodus 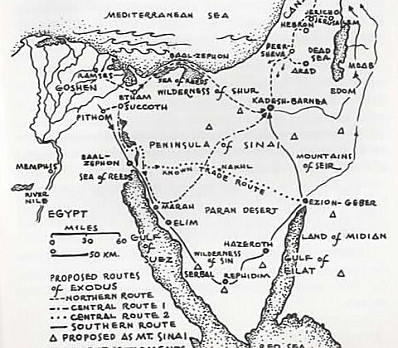 by Rachel Luxemburg
The leader lifts up the Matzo and says: Lo! Behold the matzah, the bread of affliction which our ancestors ate in the land of Egypt. Let all who are hungry come and eat. Let all who are in want come and celebrate the Passover with us. Now we are here, next year may we be in the land of Israel. Now many are still enslaved, next year may all be free of bondage. The words "maggid" and "Haggadah" come from the...