The Story of Passover

Our story starts in ancient times, with Abraham, the first person to have the idea that maybe all those little statues his contemporaries worshiped as gods were just statues. The idea of one G-d, invisible and all-powerful, inspired him to leave his family and begin a new people in Canaan, the land that would one day bear his grandson Jacob’s adopted name, Israel.

G-d had made a promise to Abraham that his family would become a great nation, but this promise came with a frightening vision of the troubles along the way: “Your descendants will dwell for a time in a land that is not their own, and they will be enslaved and afflicted for four hundred years; however, I will punish the nation that enslaved them, and afterwards they shall leave with great wealth."

Raise the glass of wine and say:

This promise has sustained our ancestors and us.

For not only one enemy has risen against us to annihilate us, but in every generation there are those who rise against us. But G-d saves us from those who seek to harm us.

The glass of wine is put down.

In the years of life in Egypt, our numbers grew, and soon the family of Jacob became the People of Israel. Pharaoh and the leaders of Egypt grew alarmed by this great nation growing within their borders, so they chose to enslave. Hard labor was demanded, perhaps even building pyramids. The Egyptians feared that even as slaves, the Israelites might grow strong and rebel. So Pharaoh decreed that Israelite baby boys should be drowned, to prevent the Israelites from overthrowing those who had enslaved them.

by Kayli Pierson
Passover is a holiday with many different themes.  This breadth ensures that no two seders will ever be exactly alike and encourages each of us to engage equally, whether this is the first or hundredth seder you’ve attended.  It also challenges each of us to connect to the seder on a personal, individual level.  The themes offered are just a sampling, what other themes are you drawn to? Redemption: In the Exodus story, the Jews were redeemed physically from slavery. While...
Kadesh 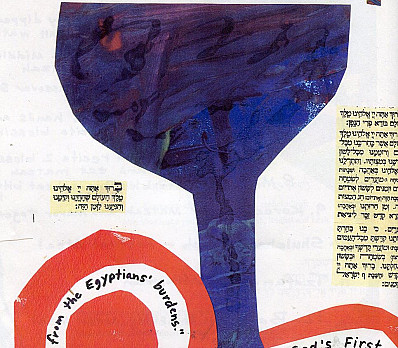 by JewishBoston
All Jewish celebrations, from holidays to weddings, include wine as a symbol of our joy – not to mention a practical way to increase that joy. The seder starts with wine and then gives us three more opportunities to refill our cup and drink. בָּרוּךְ אַתָּה יְיָ, אֱלֹהֵינוּ מֶלֶךְ הָעוֹלָם, בּוֹרֵא פְּרִי הַגָּפֶן Baruch Atah Adonai, Eloheinu Melech ha-olam, borei p’ree hagafen. We praise God, Ruler of Everything, who creates the fruit of the vine. We praise God, Ruler of Everything,...
Urchatz 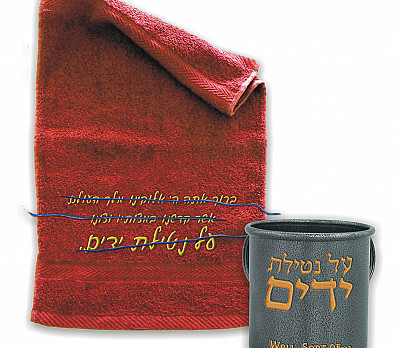 Urchatz - Wash Your Hands To Prepare for the Seder

by JewishBoston
Water is refreshing, cleansing, and clear, so it’s easy to understand why so many cultures and religions use water for symbolic purification. We will wash our hands twice during our seder: now, with no blessing, to get us ready for the rituals to come; and then again later, we’ll wash again with a blessing, preparing us for the meal, which Judaism thinks of as a ritual in itself. (The Jewish obsession with food is older than you thought!) To wash your...
Karpas

For Fresh Greens: Introduction to Blessing for Karpas

by heidi aycock
Fresh, crisp greens remind us of spring, of new beginnings, of hope.  Salt water reminds us of the long, sad season of our slavery. As we mix the two together, we remember that we must work to bring the hope of spring to everyone enslaved everywhere.
Karpas

by JewishBoston
Passover, like many of our holidays, combines the celebration of an event from our Jewish memory with a recognition of the cycles of nature. As we remember the liberation from Egypt, we also recognize the stirrings of spring and rebirth happening in the world around us. The symbols on our table bring together elements of both kinds of celebration. We now take a vegetable, representing our joy at the dawning of spring after our long, cold winter. Most families use a...
Yachatz

by Kate Groob
Breaking the middle matzah | yachatz | יַחַץ There are three pieces of matzah stacked on the table. We now break the middle matzah into two pieces. The host should wrap up the larger of the pieces and, at some point between now and the end of dinner, hide it. This piece is called the afikomen, literally “dessert” in Greek. After dinner, the guests must hunt for the afikomen in order to wrap up the meal. Because the meal cannot end...
Yachatz

by Sarah Marks
No prayer is recited before we break the middle matzah on our Seder plate. This is a silent, reflective act. For we recognize that, like the broken matzah, we are incomplete, with prayers yet to be fulfilled, promises still to be redeemed. We hide part of this broken matzah and hope it will be found by the end our Seder meal. For we recognize that parts of ourselves are yet unknown. We are still discovering what makes us whole. We hide...
Maggid - Beginning

by JewishBoston
Pour the second glass of wine for everyone. The Haggadah doesn’t tell the story of Passover in a linear fashion. We don’t hear of Moses being found by the daughter of Pharaoh – actually, we don’t hear much of Moses at all. Instead, we get an impressionistic collection of songs, images, and stories of both the Exodus from Egypt and from Passover celebrations through the centuries. Some say that minimizing the role of Moses keeps us focused on the miracles God...
Maggid - Beginning

by JewishBoston
As all good term papers do, we start with the main idea: ּעֲבָדִים הָיִינוּ הָיִינו. עַתָּה בְּנֵי חוֹרִין   Avadim hayinu hayinu. Ata b’nei chorin. We were slaves to Pharaoh in Egypt. Now we are free. We were slaves to Pharaoh in Egypt, and God took us from there with a strong hand and outstretched arm. Had God not brought our ancestors out of Egypt, then even today we and our children and our grandchildren would still be slaves. Even if we...
-- Four Questions

by JewishBoston
The formal telling of the story of Passover is framed as a discussion with lots of questions and answers. The tradition that the youngest person asks the questions reflects the centrality of involving everyone in the seder. The rabbis who created the set format for the seder gave us the Four Questions to help break the ice in case no one had their own questions. Asking questions is a core tradition in Jewish life. If everyone at your seder is around...
-- Four Children

by JewishBoston
As we tell the story, we think about it from all angles. Our tradition speaks of four different types of children who might react differently to the Passover seder. It is our job to make our story accessible to all the members of our community, so we think about how we might best reach each type of child: What does the wise child say? The wise child asks, What are the testimonies and laws which God commanded you? You must teach...
-- Exodus Story

The Story of Passover

by Old Forgotten Art Found
Our story starts in ancient times, with Abraham, the first person to have the idea that maybe all those little statues his contemporaries worshiped as gods were just statues. The idea of one G-d, invisible and all-powerful, inspired him to leave his family and begin a new people in Canaan, the land that would one day bear his grandson Jacob’s adopted name, Israel. G-d had made a promise to Abraham that his family would become a great nation, but this promise...
-- Ten Plagues

by JewishBoston
As we rejoice at our deliverance from slavery, we acknowledge that our freedom was hard-earned. We regret that our freedom came at the cost of the Egyptians’ suffering, for we are all human beings made in the image of God. We pour out a drop of wine for each of the plagues as we recite them. Dip a finger or a spoon into your wine glass for a drop for each plague. These are the ten plagues which God brought down...
-- Cup #2 & Dayenu

by Becca Goldstein
Singing Dayenu is a 1000-year old Passover tradition. The 15-stanza poem thanks God for 15 blessings bestowed upon the Jews in the Exodus. Had God only parted the seas for us, “It would have been enough” we say for each miracle or divine act, thus humbly appreciating the immensity of the gifts. KB Frazier’s reworking of the poem addresses us, rather than God. It calls us to greater action for justice, saying “lo dayenu” (it would not have been enough) in...
-- Cup #2 & Dayenu

by JewishBoston
We have now told the story of Passover…but wait! We’re not quite done. There are still some symbols on our seder plate we haven’t talked about yet. Rabban Gamliel would say that whoever didn’t explain the shank bone, matzah, and marror (or bitter herbs) hasn’t done Passover justice. The shank bone represents the Pesach, the special lamb sacrifice made in the days of the Temple for the Passover holiday. It is called the pesach, from the Hebrew word meaning “to pass...

A Meditation Before the Seder

by Old Forgotten Art Found
We begin our service in the remembrance of the Holocaust in silence. Let us surround our worship, our community in prayer, with silence in preparation for the presence of G-d. Silence does not just bring to a standstill words and noise. Silence is more than the temporary renunciation of speech. It is a door opening before prayer, toward the very realms of the spirit and the heart. Silence is the beginning of a reckoning of the soul, the prelude to an...
Kadesh

by Old Forgotten Art Found
All Jewish celebrations, from holidays to weddings, include wine as a symbol of joy – not to mention a practical way to increase that joy. The seder starts with wine and then gives us three more opportunities to refill our cup and drink. בָּרוּךְ אַתָּה יְיָ, אֱלֹהֵינוּ מֶלֶךְ הָעוֹלָם, בּוֹרֵא פְּרִי הַגָּפֶן Baruch Atah Adonai, Eloheinu Melech ha-olam, borei p’ree hagafen. We praise G-d, Ruler of Everything, who creates the fruit of the vine. We praise G-d, Ruler of Everything, who...
Urchatz

Urchatz - Wash Your Hands to Prepare for the Seder