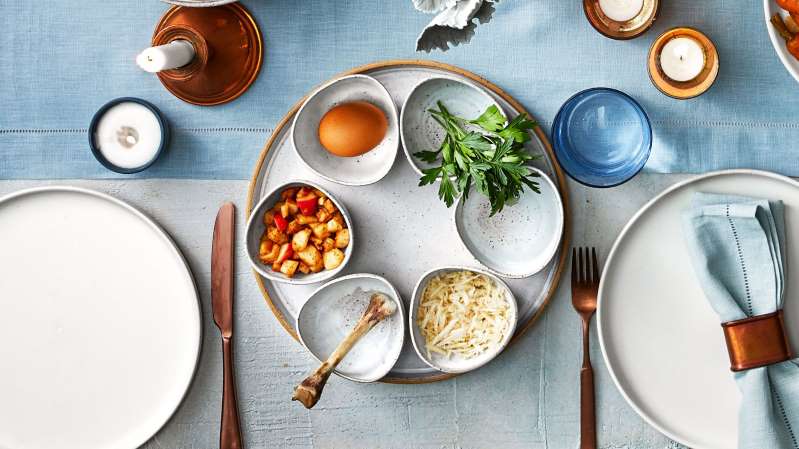 We place a Seder Plate at our table as a reminder to discuss certain aspects of the Passover story and the meaning of this holiday. Each item has its own significance.

Maror  – The bitter herb. This symbolizes the harshness of lives of the Jews in Egypt.

Charoset  – A delicious mix of sweet wine, apples, cinnamon and nuts that resembles the mortar used as bricks of the many buildings the Jewish slaves built in Egypt

Karpas  – A green vegetable, usually parsley, is a reminder of the green sprouting up all around us during spring and is used to dip into the saltwater

Zeroah  – A roasted beet or traditional shank bone (historically from the pascal lamb) is a reminder of tenth plague and symbolizes the sacrifice made at the great temple on Passover. By using a bee in place of a bone, we express our desire to more fully embrace the spirit of passover: i.e. we recognize the injustice of slavery,and don't want body parts of enslaved others on our table.

Beitzah  – An avocado pit evokes a sense of mourning for the destruction of the temple and replaces the traditional egg -- again so that we do not have products of slavery on our table.

Orange  - The orange on the seder plate has come to symbolize full inclusion in modern day Judaism: not only for women, but also for people with disabilities, intermarried couples, and the LGBT Community.

Matzah is the unleavened bread we eat to remember that when the jews fled Egypt, they didn’t even have time to let the dough rise for their bread. According to tradition, and most rabbis, to be kosher for passover, Matzah must be made from wheat, rye, barley, spelt or oats. Since growing numbers of people cannot safely eat these grains, we may choose to serve a home made, gluten free matzo, a more, "inclusive option" enabling those who can't eat gluten to fully participate in our seder.

A fifth cup of wine poured during the Seder is left untouched in honor of Elijah, who, according to tradition, will arrive one day as an unknown guest to herald the advent of the Messiah. At one point during the Seder dinner, the door is briefly opened to welcome Elijah. This commemorates the historical redemption from Egyptian bondage of the Jewish people and reminds us of our future redemption.

A cup is filled with water and placed next to Elijah’s cup. Miriam was the sister of Moses. After the exodus while wandering through the desert, legend says that a well of water followed Miriam. It was called ‘Miriam’s Well’. We seek to honor Miriam’s role and the spirit of all women, who nurture their families

Order of the Seder

Order of the Seder

by Hayley Worthman
There are fifteen steps in the Seder, described in the Haggadah. They are usually sung, to a special melody, at the beginning of the Seder and sometimes when beginning the next step in the process. The word “Seder” means “order” and we follow the steps one by one in the Haggadah. 1) Kadesh - קדש Recite the Kiddush. We make a special Kiddush for the Festival of Passover. This is the first glass of wine (There are 4 glasses during the...
Kadesh