In the Haggadah it is written: “Whoever expands upon the story of the Exodus from Egypt is worthy of praise” (Rambam, Hilkhot Hametz uMatzah 7:1). Tonight, let us expand upon the telling of the Exodus by asking questions about the African-American Spiritual “Go Down Moses,” a song that Jews have sung at Seder tables for more than half a century.

What are the origins of this song?

“Go Down Moses” (also known as “Let My People Go”) was written by enslaved Africans and their descendants as they suffered under the harsh oppression of slavery right here in the United States.

Those enslaved were inspired by the biblical story of the Exodus that they heard in church. They wrote thousands of Spirituals that expressed their yearning for freedom, and singing these Spirituals became an act of selfpreservation and resistance for them.

The message of “Go Down Moses,” perhaps the best-known Spiritual, was so clearly aligned with the Underground Railroad that some slaveholders banned its singing on their plantations. Harriet Tubman, the “Moses” of her people, used it as a signal on the Underground Railroad. The song was used as a call to leave the fields, and delivered many from their house of bondage to a promised land of freedom.

Why should we care who composed this song?

The names of the composers of “Go Down Moses” and over 6000 other Spirituals were lost to history by the time the words and music to the songs were written down at the tail end of 400 years of slavery.

As an artform, these African-American Spirituals created the bedrock of many forms of American music that have enriched our culture, including Jazz, Gospel, and the Blues.

Those who wrote these Spirituals deserve to be acknowledged. Descendants of Africans enslaved in the United States have often been last in line to receive recognition and compensation for the extraordinary contributions they’ve made to American culture.

What can we do?

This Passover, let us bring more justice (tzedek/tzedakah) into the world. Let us make a reparative tikkun, a healing. Let us commit to:
• Continue to acknowledge the experiences of enslaved Africans, including those who wrote “Go Down Moses,” and the experiences of their descendants who live in our communities today.

• Make a yearly Passover contribution to a local organization in our community serving Black people, acknowledging their extraordinary musical contributions to American culture.

If They Take You In the Morning... 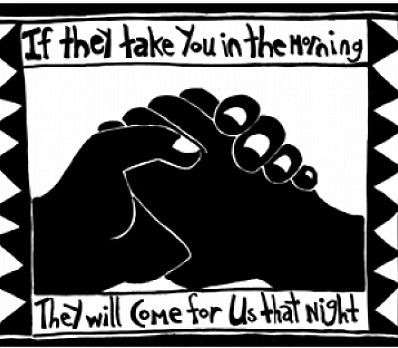 by Haggadot
Yachatz   Take the middle matzah and break it into two, one piece larger than the other. The larger piece is set aside to serve as Afikoman. This is traditionally hidden, by the leader of the Seder for the children to “steal” or “find” and then ransom for a something at the end of the Seder. The smaller piece is put back, between the two matzot. This smaller piece, along with the top matzah is what will be used for the “Motzi-Matzah”...