Orange on the Seder Plate 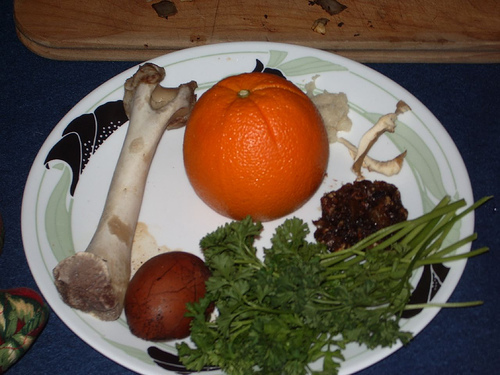 Even after one has encountered the collection of seemingly unconnected foods on the seder plate year after year, it’s fun to ask what it’s all about. Since each item is supposed to spur discussion, it makes sense that adding something new has been one way to introduce contemporary issues to a seder.

So how was it that the orange found its place on the seder plate as a Passover symbol of feminism and women’s rights?

The most familiar version of the story features Susannah Heschel, daughter of Abraham Joshua Heschel and scholar in her own right, giving a speech about the ordination of women clergy. From the audience, a man declared, “A woman belongs on the  bima  like an orange belongs on the seder plate!” However, Heschel herself tells a different story.

During a visit to Oberlin College in the early 1980s, she read a feminist Haggadah that called for placing a piece of bread on the seder plate as a symbol of the need to include gays and lesbians in Jewish life. Heschel liked the idea of putting something new on the seder plate to represent suppressed voices, but she was uncomfortable with using  chametz,  which she felt would invalidate the very ritual it was meant to enhance. She chose instead to add an orange and to interpret it as a symbol of all marginalized populations.

haggadah Section: Maror
Source: David Levy, from INCLUDING WOMEN'S VOICES: The Jewish Women's Archive edition of The Wandering Is Over Haggadah (http://www.jewishboston.com/64-jewish-women-s-archive/blogs/1996-the-wandering

The Wandering is Over Haggadah - Introduction

by JewishBoston
Tonight, we gather together to celebrate Passover. Passover is a holiday commemorating the Israelites’ liberation from slavery and their exodus from Egypt, as told in the beginning of the Book of Exodus in the Hebrew Bible. Following the command that the story should always be taught to the next generation, Jews across time and space have celebrated this joyful holiday. As you might imagine, there are many aspects of the Passover celebration that have withstood the millennia of observance, and many...
Kadesh

by JewishBoston
All Jewish celebrations, from holidays to weddings, include wine as a symbol of our joy – not to mention a practical way to increase that joy. The seder starts with wine and then gives us three more opportunities to refill our cup and drink. בָּרוּךְ אַתָּה יְיָ, אֱלֹהֵינוּ מֶלֶךְ הָעוֹלָם, בּוֹרֵא פְּרִי הַגָּפֶן Baruch Atah Adonai, Eloheinu Melech ha-olam, borei p’ree hagafen. We praise God, Ruler of Everything, who creates the fruit of the vine. We praise God, Ruler of Everything,...
Urchatz

Urchatz - Wash Your Hands To Prepare for the Seder

by JewishBoston
Water is refreshing, cleansing, and clear, so it’s easy to understand why so many cultures and religions use water for symbolic purification. We will wash our hands twice during our seder: now, with no blessing, to get us ready for the rituals to come; and then again later, we’ll wash again with a blessing, preparing us for the meal, which Judaism thinks of as a ritual in itself. (The Jewish obsession with food is older than you thought!) To wash your...