This is a supplement prepared by Rabbi Jeffrey Falick, a secular humanistic rabbi, addressing the modern archeological discoveries about the exodus and origins of the Israelites.  It blends the ancient story with the newly uncovered information to help keep the seder relevant even for those who do not regard the Torah as a history book.

Leader: The great scientist Carl Sagan wrote: Just when we’ve finally understood something [that] scientists are talking about, they tell us it isn’t any longer true.  And even if it is, there’s a slew of new things - things we never heard of, things difficult to believe, things with disquieting implications - that they claim to have discovered recently.  Scientists can be perceived as toying with us….

Sagan was writing about physics, but he just as well might have been referring to historical archeology.  Less than 100 years ago, scholars still believed that the basics of our Exodus tale were true in most details.  But then they started digging.  And soon it became clear that the story we had told ourselves for millennia was not true in its details.

Together: That’s when they made an astonishing discovery:  There had been no mass Exodus from Egypt.  The Israelites were natives of the Land of Israel.  They were Canaanites themselves!

Leader: Our ancestors were Canaanites living in their own land.  But they were not free and Egypt was not innocent.  For while they might not have been slaves IN Egypt, we discovered that they were slaves TO Egypt.

What history revealed was a story every bit as wondrous as the myth of Moses and the Exodus.  It is a narrative of Egyptian conquest of the Land of Israel and how the Pharaoh Ahmose and his descendants established a crippling system of corvée labor among the peasants of the land.

Together: It is the story of kings of Canaan who bowed to the Pharaohs.  They forced their own people to abandon family fields and to work their royal lands.

Reader: From their midst arose bands of rebels who led a peasant revolt and soon Israel was freed from the yoke of the Egyptians.  Archeology shows that tribes and towns began to form, bringing together the disparate rebels.  In a long, complicated and gradual process they became known as the Israelites.  They did not conquer the land from abroad, but they fought fiercely to unite their brothers and sisters so that they might thrive in their homeland.

Together: Here’s another question on a night of questions.  Why did people who were native to the Land of Israel tell a story in which they were outsiders?

Reader: Exoduses from Egypt to Israel and back were common occurrences.  The Nile provided a more constant source of water than Israel’s rains.  This ongoing dependence was a kind of servitude, too.  In short, Egypt dominated everything in the entire region for generations.

Perhaps the real story was too complicated and perhaps, like us, the Israelites needed a clear and simple narrative in order to appreciate the significance of freedom and to celebrate their special attachment to a land that was always claimed and conquered by others.

Together: The details are buried in history, but history gives wings to legends and legends yield heroes like Moses.

Reader: Over hundreds and hundreds of years, the story of this successful rebellion and the freedom it brought transformed  into the tale of one great man, dedicated to justice and liberation for his people.  Like the rebels of history, he challenged a Pharaoh and brought freedom to his people.  And he came to represent the hundreds or perhaps thousands who fought to be free….

Together: It is his story - now our story - that we tell tonight.

by Rabbi Denise
Welcome! We come together, a collection of those who are Jewish and Jew ish,  proximal to or in loving relationship with Jews, those who are Jews by choice or becoming-Jews. We come here across vast distances and representing many identities and experiences. It’s perfect that we participate in a seder together, for the seder itself has brought Jews together across time and all the world. We, like all those many others, respect this tradition while we make it our own.
Introduction

Passover For Secular And Humanistic Jews

by Society for Humanistic Judaism
The holiday of Passover is one of the most celebrated holidays in the Jewish calendar. Some believe that’s because the holiday is primarily home-based and does not require membership or involvement in a synagogue or temple, although it can. The history of Passover, like most Jewish holidays, is multi-layered. It began with the celebration of spring, the rebirth of nature, and the birth of baby animals. The Exodus from Egypt was a later layer, which became the central and compelling story...
Introduction

by Society for Humanistic Judaism
Roasted Shank Bone (Zeroah) “Passover is the amalgamation of two ancient festivals—one called Pesach, the other Chag Hamatzot. Pesach was originally a shepherd festival, observed in the early spring when the sheep gave birth to their young. It was customary for each family to sacrifice a lamb to assure a healthy flock. The presence of the shank bone on our seder table recalls the primitive beginnings of the festival we now call Passover and impresses us with the antiquity of our...
Introduction

by Rabbi Denise
In joy and celebration, we come together at this seder. Brukhim ha-adama ha-shemesh v’ha-geshem shehborim pre hagafen. Blessed are the earth, the sun, and the rains that bring forth the fruit of the wine.
Kadesh

First Cup Of Wine - The Cup of Freedom

by Truah: The Rabbinic Call for Human Rights
The beauty of Urchatz was revealed to me during a women's seder.  Each participant washed the hands of another with care and kavanah (intentionality)—and without words. The sisterhood created in the sacred silence elevates communal consciousness. How will we utilize this state of purity? V'ahavtah l're'echa kamochah - to love the other as ourself. How will this ancient wisdom propel us forward to empower the silent? How will we elevate the hands of all those still in Mitzrayim? --Jessica K. Shimberg,...
Urchatz 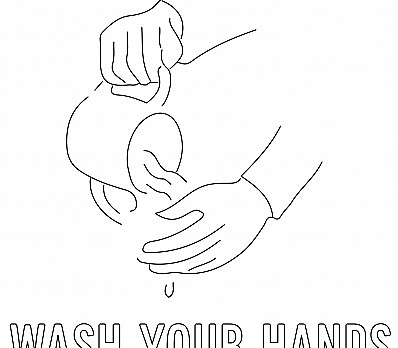 by Herbert Levine
Choose from among the spring vegetables on the Seder table and dip one in salt water. The spring vegetable reminds us to pay attention to this season, the time in the northern hemisphere when we again see flowers blooming and hear birds chirping.  The salt water in which we dip the vegetable recalls the salty tears our ancestors shed when they were enslaved as well the tears of those today who are oppressed or enslaved.  The blessing we recite heightens our...
Yachatz

by Machar Congregation
Leader: We have drunk the wine and tasted the special foods of the Passover celebration. They symbolize our attachment to the traditions of our culture, to freedom, and to life. To remind us of these values as we go back out into the world, at the end of our festival meal, we shall return to have a final taste of matzah - our symbol of suffering and liberation, of renewal in nature and humanity. I am breaking this matzah into two...
Maggid - Beginning

by Society for Humanistic Judaism
The story we recall tonight is the product of Israelite imagination. It does not describe actual events.  There are aspects that are somewhat disturbing. Some parts of the narrative even suggest that Pharaoh is not completely responsible for his own behavior. Just when it seems that he might relent, the Israelites’ God actually “hardens his heart!”  In any case, both Pharaoh and the God of the Israelites are responsible for much torment. To our modern sensibilities, neither of them comes out...
Commentary / Readings 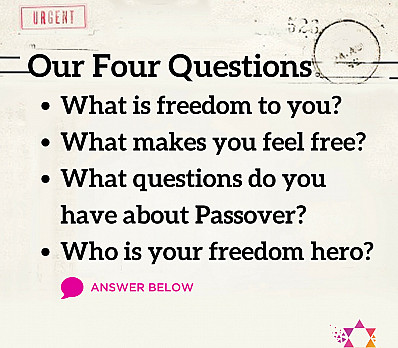 by Society for Humanistic Judaism
MAGGID - STORY These questions are important. But before I answer them, let me tell you the story of Jewish hope. Our ancestors lived in the land of Israel. But their children have wandered the earth to look for freedom and dignity. Our roots are in Israel. But our branches travel the surface of the globe. Some of our ancestors traveled to Egypt. It was a time of famine and they were hungry. The king of Egypt welcomed them and gave...
-- Four Questions

by Jonah Moos
ANOTHER SET OF ANSWERS Traditionally the Torah speaks of the four types of sons to describe the four types of Jews. Tonight we will speak of four different people using this ritual to share their spirituality: (1) the Traditionalist, who is active, knowledgeable and involved in his or her Judaism, (2) the Humanist or Secular Jew, who has a sense of the Jewish community that drives his or her social activism, (3) the Buddhist, whose heritage is at least partly Jewish,...
-- Four Children

by Congress of Secular Jewish Organization
The Passover Seder has a series of 'fours' in its text. There are four cups of wine, four questions, and a discussion about four types of children. People throughout the ages have pondered - who are the four children? Are they among us? Are they within us? This reading about the four children is different from many others. Our version deals with the continuing struggle in the Middle East between Israel and her Arab neighbors. The Angry Child asks, "Why should...