Kavannah for Opening the Door for Elijah

Clip Featured in Haggadot's
Honoring The People Of Ukraine 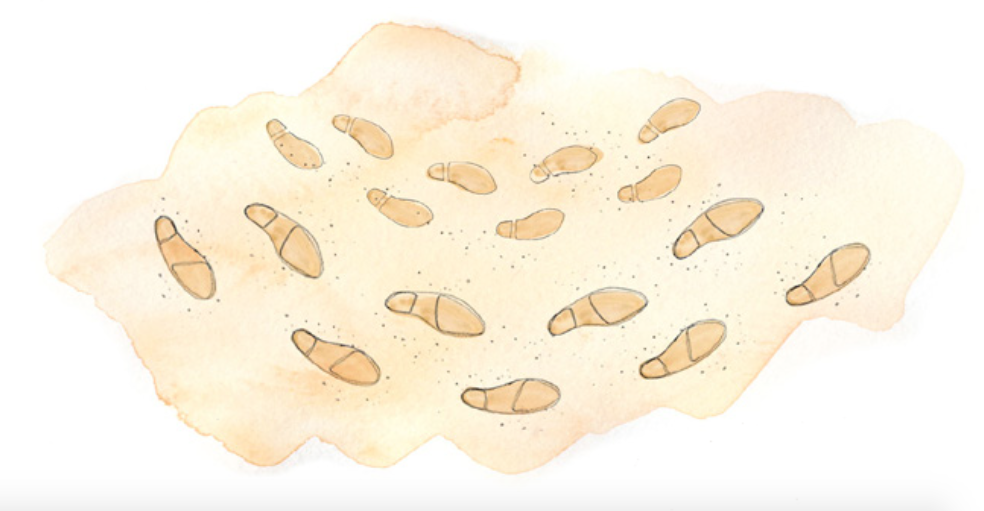 Gathered around the Seder table, we pour four cups, remembering the gift of freedom that our ancestors received centuries ago. We delight in our liberation from Pharaoh’s oppression.

The first cup as God said, “I will free you from the labors of the Egyptians.”

The second as God said, “And I will deliver you from their bondage.”

The third as God said, “I will redeem you with an outstretched arm and with great judgments.”

The fourth because God said, “I will take you to be My People.”

We know, though, that all are not yet free. As we welcome Elijah the Prophet into our homes, we offer a fifth cup, a cup not yet consumed.

A fifth cup for the 60 million refugees and displaced people around the world still waiting to be free— from the refugee camps in Chad to the cities and towns of Ukraine, for the Syrian refugees still waiting to be delivered from the hands of tyrants, for the thousands of asylum seekers in the United States still waiting in detention for redemption to come, for all those who yearn to be taken in not as strangers but as fellow human beings.

This Passover, let us walk in the footsteps of the One who delivered us from bondage. When we rise from our Seder tables, may we be emboldened to take action on behalf of the world’s refugees, hastening Elijah’s arrival as we speak out on behalf of those who are not yet free.

by Thomas Michel
A Prayer for Peace in Ukraine and Beyond Rabbi Rachel Sabath Beit-Halachmi We come before you, Adonai, praying for peace. A new war has begun, and thousands of innocent people are dying… We pray for the strength and courage of the few faced with the ruthless power of the many. We stand together with our brothers and sisters in the Ukraine, the birthplace of so many of our ancestors, a place where the Jewish people has known both light and darkness....
Introduction 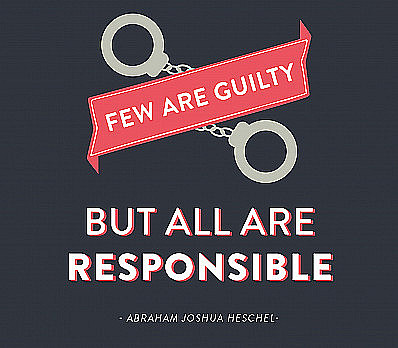 by The National Library of Israel
Winter is Over by Daniel Prakhabmek Winter is over, the cold is gone, The universe is filled with joy. The southerly winds slowly blow Repairing a gloomy soul.   Young sun, spring sun, Shining in the sky, Casting a wealth of light on the Earth, Blinding eyes.   The naked trees, Are awakened again, The noisy city, Dons a new face.   Everything is joyful, alive, and glowing, The spirit of spring washes over all Happy are the tall buildings, Crowned by high mountains.  ...
Yachatz 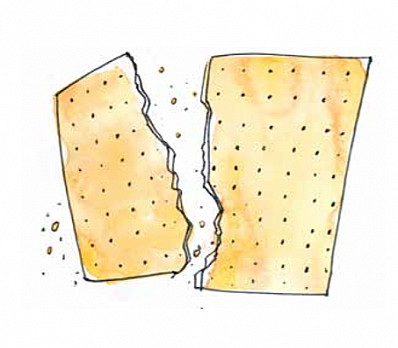 by Eric Lieberman
This is not only the bread of our affliction, but also the lechem oni, the bread of those in dire need. It's called that because of its purposeful lack of ingredients — only unleavened flour and water, nothing to make it rise, and it must be baked in haste — the food of those with nothing, those who've left everything, in desperate need of a miracle. It is the bread we took with us when we rushed out of Egypt to...
-- Four Questions

Poem by a Ukrainian Schoolchild, 1920, NLI

by The National Library of Israel
by Sarah Aspel How awful is winter’s great cold How beautiful spring’s pleasant winds, The trees, have you seen, how beautiful they are in the spring, In winter, they stood, mourning and asleep, And here, spring is come, they have woken, risen, They begin to look around, around, -“Thank God, winter is over!” The trees begin to whisper among themselves -“Now we will grow with the coming of spring!”
-- Exodus Story

Never Again? This Passover Share Thoughts on the War in Ukraine 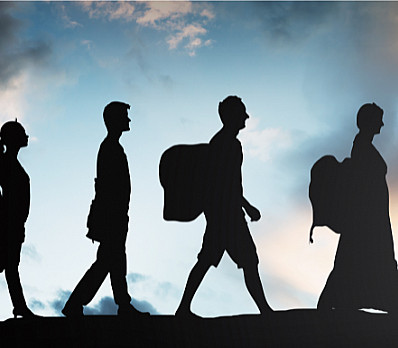 Take Only What Is Most Important

by Jake Weinberg
By Serhiy Zhadan Translated from the Ukrainian by Virlana Tkacz and Wanda Phipps   Take only what is most important. Take the letters. Take only what you can carry. Take the icons and the embroidery, take the silver, Take the wooden crucifix and the golden replicas. Take some bread, the vegetables from the garden, then leave. We will never return again. We will never see our city again. Take the letters, all of them, every last piece of bad news. We will...
-- Cup #2 & Dayenu

by Lisa Gitelson
no one leaves home unless home is the mouth of a shark. you only run for the border when you see the whole city running as well. no one would leave home unless home chased you, fire under feet, hot blood in your belly. it's not something you ever thought about doing, and so when you did - you carried the anthem under your breath, waiting until the airport toilet to tear up the passport and swallow, each mouthful of paper...
Shulchan Oreich

Sunflowers On Your Table 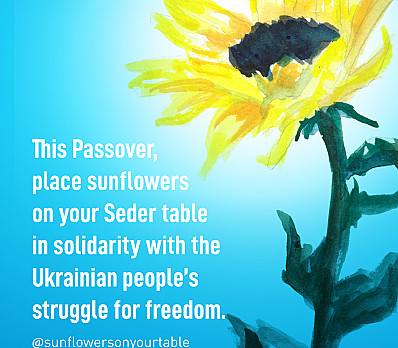 Kavannah for Opening the Door for Elijah 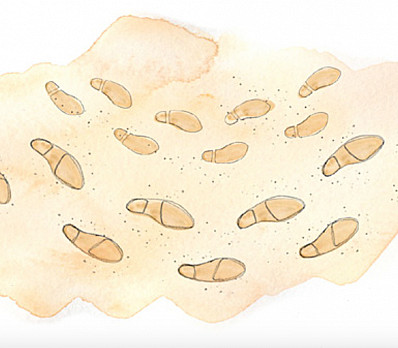 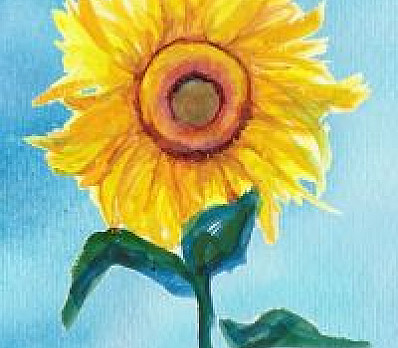 A Prayer for Peace and the people of Ukraine

by Adam Kirwilliam
A Prayer of Peace for the People of Ukraine by Rabbi Naomi Levy God, Our hearts are with all the people of Ukraine, Its president, Volodymyr Zelensky,  And with our Jewish brothers and sisters in Ukraine 200,000 souls Who crouch in fear  As the sound of sirens and bombs pierces the air. Synagogues once filled with songs of celebration  Have become makeshift shelters. Echos of the Holocaust reverberate, The memory of the one and a half million  Martyred Ukrainian Jews.  God,...
Commentary / Readings

An Extraordinary Word for Good

by Haggadot
When I grew up in Ukraine in the city of Oonetsk, there were people of various nationalities living there. Their 10 certificates had the word 'Russian,' 'Ukraine,' 'Georgian,' 'Kozaki,' it wasn't that important and there wasn't much of a difference. One thing was important - if it had the word 'Jewish' written on it, that would be as if you had some disease. We knew nothing about Judaism, except antisemitism and hatred towards us. That's why no one tried to replace...

by HIAS
Following the framework of the Four Questions of the Passover haggadah, we ask four alternative questions for discussion. These questions are meant to spark conversations that can happen throughout the seder. First Question Read this narrative aloud and then discuss the question below. “When I found out I got into the University, I immediately called my ‘real’ mom in Afghanistan, whom I haven’t seen since I was 14. My family, which belongs to the Hazaras, lived under the constant threat of...
-- Exodus Story

Stand With Refugees This Passover 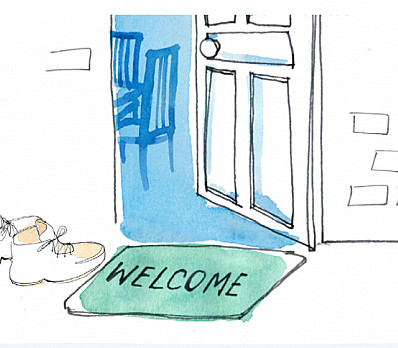 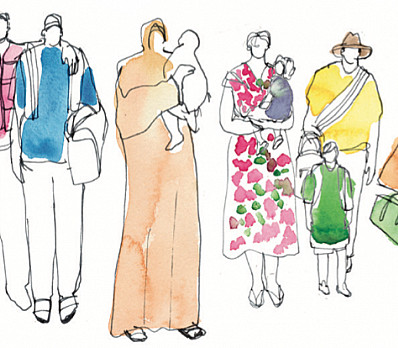