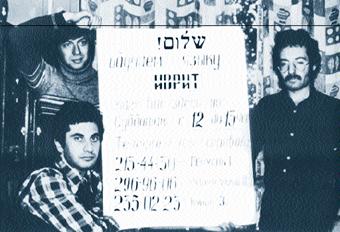 We begin the Seder by eating the karpas, a fresh green sprig. With it, we ingest the resolute force of new life.

We dip the karpas in salt water to commemorate the tears that the Jews cried when enslaved in Egypt.

So, dipping the karpas in the salt water suggests the possibility of growth and renewal even in the midst of difficult times.

Stories of Soviet Jews keeping forbidden Jewish traditions and culture alive during Soviet repression exemplify this. Learning and teaching Hebrew (see photograph), putting on Purimspiels, secretly organizing Shabbat and actively participating in the underground movement of samizdat, illegally publishing both religious and secular Jewish literature despite the threat and sometimes reality of imprisonment or worse.

In these ways, even in the midst of oppression, these Soviet Jews kept seeds of their culture alive.

Although Soviet Jewish history is certainly full of suffering both under the Russian Empire and during the Soviet Union, we are now blessed to have the freedom to celebrate our identity and the opportunity to participate in a re-birth of Jewish life.

by Katya Rouzina
For Passover we drink four cups of wine to invoke the promises G-d made to the people of Israel. Pesach celebrates freedom and redemption, yet it reminds us that we are neither truly free, nor fully redeemed.
Introduction

Welcome to the Celebrate Freedom Seder

by Katya Rouzina
Добро пожаловать, друзья! Chag Pesach Sameach! Welcome to the First Annual Russian Jewish Columbus Celebrate Freedom Seder! On this day, as Russian-speaking Jewish Americans with a very special history and identity, we commemorate the Exodus of Jews out of the USSR and reflect on our own personal Freedoms, whatever they are for each one of us. This Seder, which means the order of this festive meal, will takes us in order from slavery to freedom! On the opposite page you will...
Kadesh

by Katya Rouzina
Pour the first glass of wine (don't drink yet!) Over the course of the Seder we drink 4 cups of wine. This is traditionally done to commemorate the promises G-d made to the people of Israel in Exodus 6:7-6 to free them from slavery in Egypt, to redeem them, to take them as His people, and to be their G-d. The beginning of all journeys is separation. You’ve got to leave somewhere to go somewhere else. It is also the first...