How are longstanding Jewish languages faring today? Although most descendents of Yiddish speakers no longer speak the language, Yiddish is thriving in Hasidic communities, especially in the United States, United Kingdom, Belgium, and Israel. Two other languages are still spoken by some young people in select communities: Judeo-Tajik/Bukharian (Bukharan Jews of Uzbekistan and other parts of Central Asia) and Judeo-Tat/Juhuri (Mountain Jews of Dagestan and Azerbaijan), but these languages are also threatened. Most other longstanding Jewish languages are endangered, because the only remaining speakers are elderly. Due to the Holocaust and various expulsions and migrations in Europe, the Middle East, Africa, and Asia, most of the people who spoke these longstanding languages could not or did not pass their language on to their children. Some highly endangered languages include Jewish Neo-Aramaic (Kurdish territories of Iraq and neighboring countries), Jewish Malayalam (Southern India), and various Median languages from Iran, like Judeo-Shirazi and Judeo-Hamadani.

As many Jewish languages become endangered, small groups of Jews are expressing renewed interest in them. Jews gather to celebrate Yiddish, Ladino, Judeo-Arabic, and Judeo-Italian, and they use them in artistic work, especially music, theater, and film. This “postvernacular” activity, however, will not reverse the trends toward endangerment.

At the same time, new Jewish languages are developing, such as Jewish English and Jewish Latin American Spanish. These languages tend to be similar to the local non-Jewish language, and most are written in the Latin alphabet, rather than Hebrew letters like many longstanding Jewish languages. But they continue to draw from multiple linguistic sources. For example, Swedish Jews incorporate Hebrew, Yiddish, and Western Yiddish into their Swedish, saying peisachdike (kosher for Passover) and Jag vill battla chomez (I want to get rid of chametz). In France, Algerian-origin Jews call matzah matsa or galette, and Moroccan-origin Jews say, “Bibilu, ça porte bonheur!” (In haste, that brings honor; referencing the “Bibhilu” piyyut they recite as they wave the seder plate over guests’ heads before Ha Lahma). Jews in Hungary call “matzah ball soup” mat͜sesgombot͜slevesh and “kosher for Passover” kosher pesachra. Contemporary Jews are continuing the centuries-old tradition of creatively infusing the local spoken language with the Hebrew of sacred texts and languages reflecting Jews’ historical migrations. How do these linguistic trends play out in your family?

Passover Around the World

by Jewish Language Project
The Passover seder (ordered ceremony) as traditionally practiced by Jews includes several ancient languages – Hebrew (most of the Haggadah), Aramaic (Ha Lachma, Chad Gadya), and Greek (afikoman). But Jews around the world have incorporated their own local language and languages of their ancestors into their celebration of the holiday. Inside you will find Passover phrases and songs in various languages.
Introduction 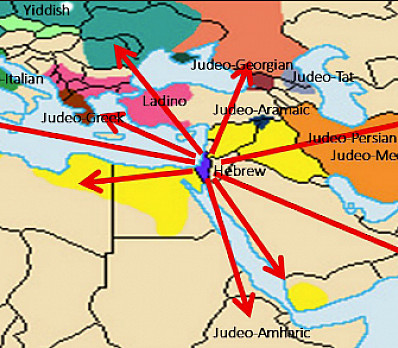