"How Matzah Became Square: Manishewitz and the Development of Machine-Made Matzah in the United States," Jonathan D. Sarna. Sixth Annual Lecture of the Victor J. Selmanowitz Chair of Jewish History, 2005. In 1888, after several years as a shohet ubodek and part-time peddler, Behr Manischewitz opened a matzah factory in Cincinnati. This was a common profession for Jewish immigrants, especially those trained in shehitah, for matzah too as a Jewish food strictly regulated by Jewish law and requiring supervision. Moreover, demand for matzah was rising steadily in the United States, keeping pace with the growth of America's Jewish population, and the industry as a whole was in the midst of a great transformation. Through the mid-19th century, most matzah had been baked by synagogues. . .With the collapse of the synagogue community and the subsequent proliferation of synagogues in all major American Jewish communities, the now functionally delimited synagogues spun off many of their old communal functions (including responsibility for communal welfare, the mikvah, and kosher meat), and it was at this time, at mid-century, that independent matzah bakers developed (2).

At the time that Manischewitz entered the matzah business, the industry was in a state of considerable flux. Much of the world's matzah was still made totally by hand (3).

In the 19th century, with the rise of industrialization, processes like this began to be mechanized, and in 1838 an Alsatian Jew named Isaac Singer produced the first known machine for rolling matzah dough (4). Subsequently, the matzah machine became embroiled in a sharp and very significant halakhic controversy (along with social justice issues of preserving work for poor people as well as issues concerning modernity and Judaism) (4-5).

Manischewitz introduced a series of improvements and inventions that revolutionized the process of matzah baking the world over. . By 1903, he was using at least three different machines as part of the matzah making process. Jacob Uriah Manischewitz, who succeeded his father as president of the Manischewitz company upon the former's untimely passing in 1914, is credited with more than fifty patents including an electric eye which automatically counted the number of matzos in a box at a rate of 600 a minute, as well an innovations in packaging, and a special "matsos machine" introduced in 1920, which could produce 1.25 million matzohs every day (6).

The result was nothing less than a revolution in the matzah business characterized by three major transformations: First, where before most matzah had been round, irregular or oval shaped now, largely because of the demands of technology and packing, it became square. Second, where before each matzah was unique and distinctive in terms of shape, texture, and overall appearance--no two were identical as it true of shmurah matzah to this day-- now every matzah in the box came out looking, feeling, and tasting the same. Matzah thus underwent the same process of rationalization, standardization, and mechanization that we associate with the American management revolution wrought by Frederick Winslow Taylor. Finally, where before matzah was a quintessentially local product on an as-needed basis in every Jewish community and not shipped vast distances for fear of breakage, now it became a national and then an international product (7).

haggadah Section: Commentary / Readings
Source: Excerpts taken from: "How Matzah Became Square: Manishewitz and the Development of Machine-Made Matzah in the United States" 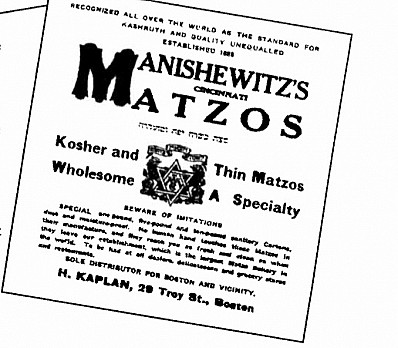 by Jonathan Sarna
"How Matzah Became Square: Manishewitz and the Development of Machine-Made Matzah in the United States," Jonathan D. Sarna. Sixth Annual Lecture of the Victor J. Selmanowitz Chair of Jewish History, 2005. In 1888, after several years as a shohet ubodek and part-time peddler, Behr Manischewitz opened a matzah factory in Cincinnati. This was a common profession for Jewish immigrants, especially those trained in shehitah, for matzah too as a Jewish food strictly regulated by Jewish law and requiring supervision. Moreover, demand...