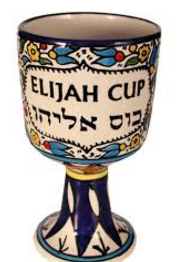 The Wandering is Over Haggadah - Hallel

This is the time set aside for singing. Some of us might sing traditional prayers from the Book of Psalms. Others take this moment for favorites like Chad Gadya & Who Knows One, which you can find in the appendix. To celebrate the theme of freedom, we might sing songs from the civil rights movement… just roll with it. [To help:]

Fourth Glass of Wine
As we come to the end of the seder, we drink one more glass of wine. With this final cup, we give thanks for the experience of celebrating Passover together, for the traditions that help inform our daily lives and guide our actions and aspirations.

We praise God, Ruler of Everything, who creates the fruit of the vine.

Elijah was a prophet in the days of the autocratic kings of ancient Israel. He was sent
to defy their power. According to custom, he did not die, but stayed to witness the
good that people could do in the world that would eventually bring about the ideals
of a messianic era. It was a custom to see Elijah as the one who would eventually
resolve all outstanding divisive issues – including the question of whether the
number of cups of the seder were four or five. An extra cup is kept on the table in
honor of Elijah’s role in resolving conflict in the building of community.

Miriam, of the Exodus story, was seen in the Midrash as having the implement of a
portable well which would overflow at each spot the Israelites would camp. The
legend says that the flow from her well would create rivulets which enabled people in
the encampments to raft their way to each other and create a network of community
adhesiveness.

Let us honor Miriam with Elijah's Cup, we pour a bit more wine, to have the cup overflow.

by David & Susan Green
Why Do We Celebrate Passover? Passover has been celebrated in Jewish homes for thousands of years as a way of passing on the important story of Moses and of the exodus from Egypt. Some Christian families celebrate Passover as well, because Jesus was Jewish. The famous Last Supper in the Christian tradition was actually a Passover Seder meal. We come together as one family today. Whether we are Jewish, Christian, Muslim, Buddhist, Bahá’i, Unitarian-Universalist, Humanist or from another faith, on Passover...
-- Four Children

by David & Susan Green
Traditionally we speak of 4 children--of the need to speak in a different voice to different people. It is easy to see this as simply good parental advice--all parents know this lesson. But maybe it is also because we ourselves have different answers, at different times and in different contexts. Maybe we give different answers because we ourselves are still thinking it through. Arthur Green says this is a central part of today's Judaism: "I believe with complete faith that new...
Introduction