About two thousand years ago, the Jewish people reshaped that celebration into a Seder, a story and meal that could be eaten and told at home. The Passover story and celebration entered the memory stream of Christianity as well, through the Palm Sunday demonstrations of a group of Jews who came to ancient Jerusalem one spring, part of the general Jewish ferment against the Roman Empire. This particular group was led by Jesus, waving palm branches as a symbol of resistance. It entered Christianity more deeply still through the teachings of Jesus in the Last Supper, which seems to have been a Passover Seder.

Still later, Islam welcomed Moses as a prophet, as it is written:

In the name of Allah, most benevolent, ever-merciful. These are the verses of the illuminating Book. We narrate to you from the history of Moses and Pharaoh in all verity, for those who believe. The Pharaoh became high and mighty in the land, and divided the people into different classes. He impoverished one class, slaying its males and sparing its women, for he was indeed a tyrant. We [God] wished him to favor those who were weak in the land and make them leaders and heirs and establish them in the country. (Al-Quran, 28: 1-6; Ahmed Ali translation)

In modern times, the experience of slavery for African-Americans and their hope of liberation were crystallized into dozens of songs and thousands of sermons about the Exodus of ancient Israelites from slavery.

In 1968, Dr. Martin Luther King was planning to take part in a Passover Seder with the family of Rabbi Abraham Joshua Heschel, who marched and prayed and struggled alongside him against racism and militarism in America. But ten days before the Seder, Dr. King was murdered, called across a different river to a different Land of Promise.

His death called forth a Black uprising in many American cities, followed by the US Army's armed occupation of many inner-city communities, including my neighborhood in Washington DC.

Walking past the troops as I prepared for that Passover 41 years ago, I was overwhelmed to find myself feeling and thinking, "This is Pharaoh's Army!"

That experience renewed and transformed my own understanding of the Seder. I felt myself called to write a Freedom Seder that would celebrate the freedom struggles of Black America and of other peoples alongside the Jewish tale of liberation. It was published in Ramparts magazine and as a tiny pocket-sized book in 1969, illustrated by Lloyd McNeill, a Black artist-activist.

On April 4, 1969, the first anniversary of Dr. King's death and the third night of Passover that year, a group called Jews for Urban Justice sponsored the first Freedom Seder. It was held in the basement of Lincoln Congregational Temple, the oldest African American Congregational Church in Washington, DC. About 800 people—Blacks, Jews, white Christians—took part. The Seder was broadcast in New York by WBAI and across Canada by the CBC.

In 1970, the Freedom Seder was published by Holt Rinehart Winston. It was celebrated by about 4,000 people in the Cornell University Fieldhouse, providing an opportunity for the brief liberation from underground of Father Daniel Berrigan, an anti-war resister who was being pursued by the FBI.

During the years since 1969, the original Freedom Seder has seeded a great harvest of new versions of the Seder that have spoken to many forms of freedom: feminism, peace between Israelis and Palestinians, ending the danger of nuclear holocaust, achieving eco-sanity, solidarity with Latin American movements against tyrannical rulers, personal spiritual liberation and more. For millennia, from year to year to year to year, the Seder has renewed the lives of families and friends, has welcomed the newborn and accompanied the dying.

Now it is we who renew the Seder, rebirthing the Telling of freedom itself as the Telling rebirths us.

Forty years after the first Freedom Seder, the profound questions Dr. King raised in his Riverside Church speech exactly one year before his death --– militarism, racism, materialism as the triplets of danger corrupting American society – have risen before us again, as he warned they might. The link between constant warfare abroad and constant shortfalls in meeting human needs at home has become even clearer. Even larger numbers of people have lost their jobs and stand on the edge of the pit of poverty. Materialism run amok threatens to gobble up the earth, to kill thousands of species and disrupt the very climate that weaves our web of life .

Forty years after the first Freedom Seder, new Pharaohs have arisen. The institutional Pharaohs of our day are pressing down not just one people, one community, or another, but all the peoples on our planet and the web of life itself. In this Freedom Seder, we address Dr. Martin Luther King’s warning about “the giant triplets of racism, extreme materialism, and militarism,” which have threatened the very earth that sustains us all.

For the Passover story reminds us: not only do new Pharaohs arise in every generation; so also do new grass-roots movement to free ourselves from these new pharaohs. Forty years after the first Freedom Seder, America today stands also on the brink of hope, "mixing memory with desire, stirring dull roots with spring rain. "

So we celebrate and we join these grass-roots movements focused on concern for earth. After all, this festival began with shepherds and farmers celebrating the renewal of life in springtime. The miracles of barley sprouting and lambs being born inspired the earliest celebrations of the earth. The greens and herbs, unleavened bread and roasted eggs that are part of the Seder meal preserve this aspect of the journey.

In the biblical story of the Liberation and in the tale told during the traditional Seder, we recall that the ancient Pharaoh brought Ten Plagues upon the earth. All of them were ecological disasters: the rivers became undrinkable; frogs burst all boundaries as their natural predators vanished; cattle were struck by mad cow disease; locusts swarmed and devoured the crops; a climate disaster—unprecedented hailstorms—befell the Land; even those whose eyes had been closed to suffering were blinded by a sandstorm of darkness so thick it could be felt.

These plagues befell the land because of Pharaoh's stubbornness, his arrogance, his hardheartedness—his addiction to his own power, an addiction so strong that he could not abandon tyranny even when his stubbornness brought destruction on his own people, how own household.

Oppression of human beings and destruction of the earth go hand in hand. Our ancient forebears could see that there was a connection. They called it "YHWH, Yyyyyhhhhwwwwhhhh," the Interbreathing of all life, but they could not spell out the specific practices and processes by which these two oppressions were joined. Today we can.

Today as well, we face Plagues that trouble the earth and all humanity. Who and what are the institutional pharaohs in our time? What are the destructive Plagues of our own generation? What can we do to bring Ten Blessings, Ten Healings, on the earth in our own lifetimes?

-- Rabbi Arthur Waskow, Director — Arlene Goldbard, Chair of the Board

Freedom Seder for the Earth- Cover 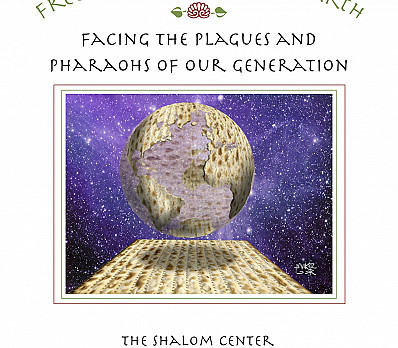 Freedom Seder- Wisdom Toward the Journey

by Shalom Center
" Prayer is meaningless unless it is subversive, unless it seeks to overthrow and to ruin the pyramids of callousness, hatred, opportunism, falsehoods. The liturgical movement must become a revolutionary movement, seeking to overthrow the forces that continue to destroy the promise, the hope, the vision." — Rabbi Abraham Joshua Heschel, 1970 "If we are to get on the right side of the world revolution, we as a nation must undergo a radical revolution of values. We must rapidly begin the...