Dip Before You Sip

There comes a time during the course of the Passover seder, when some of us are inclined to take an admiring look at the sparkling white tablecloth, radiant with beautiful festival dishes and fancy silverware.

And then we cringe.

The occasion for this uneasiness is the anticipation of a picturesque custom in which we begin to trickle droplets of wine from our cups.

Ideally, the dripping would be contained safely in a plate or other vessel. In the real world, however, you can be certain that at least some of the wine will end up being soaked into the tablecloth, while remnants will remain on the children's fingers for future smearing into the walls or holiday clothing.

This is, of course, one of those little inconveniences that we are happy to put up with for the sake of a meaningful celebration of the festival of freedom.

According to the familiar practice, the spilling of the wine commences with the quotation from the prophet Joel: "And I will show wonders in the heavens and in the earth, blood, and fire, and pillars of smoke" A dripping is performed for each of the three wonders mentioned in the verse, and then again with the enumeration of each of the ten plagues inflicted upon Egypt.

The matter does not stop there, as yet another three wine drops are spilled to correspond to the three-word mnemonic abbreviations proposed by Rabbi Judah to remember the correct order of the plagues: D'tzakh, 'Adash, Be'ahav.

As several medieval commentators point out, the total number of drippings was considered crucial. The fact that they added up to sixteen was invested with allegoric or mystical importance, especially in the writings of the German pietists of the Hassidei Ashkenaz movement, who often devoted their spiritual energies to counting the numerological values of the letters or the numbers of words in prayers and sacred texts.

Some interpreters stated that the number of the wine-drops corresponded to the sixteen blades of a terrifying sword wielded by the Angel of Death. Thus, in splattering the wine outside the cup, we are trying to assure ourselves that death will remain on the outside.

In the name of Rabbi Eliezer Rokeah, it was pointed out that this same number sixteen underlies some central Jewish observances, such as the numbers of lambs offered in the Temple during a normal week; or of men called to the reading of the Torah during the week (seven on Saturday morning, and three each on Saturday afternoon and Monday and Thursday mornings).

And if anybody feels skeptical about such bizarre associations, Rabbi Rokeah is quick to admonish them: "You should not scoff at the customs of our holy ancestors"

Rabbi Jacob Moelin (the Maharil) offered his own version of the reasoning behind the practice: Since the cup of wine is traditionally associated with blessings, it follows that spilling the drops outside the cup can transfer the destructive plagues away from Israel, and deflect them onto our persecutors.

The anonymous commentary printed in the Prague Haggadah connects this sentiment with the biblical text (Exodus 15:26) "I will put none of these diseases upon thee, which I have brought upon the Egyptians"

Most of the interpretations that we have cited here have a vengeful or vindictive tone to them, in that they are concerned with metaphorically diverting the plagues away from Israel and towards the Egyptians and their latter-day successors. This xenophobia reflects the historical origins of the custom in medieval German communities, where relations with the Christian majority were often strained, and Passover could serve as the occasion for anti-Jewish violence.

A more enlightened attitude is evident in the Sepharadic milieu, in Don Isaac Abravanel's commentary to the Passover Haggadah. Although he would eventually fall victim to the Spanish and Portuguese expulsions, Abravanel's exegesis expresses the universalistic sentiment that our cup of joy cannot be full as long as our liberation has to involve punishment of others.

A similar interpretation was favoured by Rabbi Samson Raphael Hirsch and other nineteenth-century scholars. In fact, this last-mentioned rationale has became the most frequently cited one at North American seders, and I suspect that the older medieval explanations are virtually unknown to most modern Jews.

Some interesting divergences of opinion surround the proper manner in which the wine should be dripped. Each tiny detail in the procedure was felt to be fraught with symbolic meaning, and therefore could not be left to personal preference.

Thus, Rabbi Moses Isserles insisted that the wine should be spilled by placing the forefinger in the cup. It is this limb that in Hebrew is referred to as esba, the generic word for "finger" and it therefore evokes the biblical passage in which Pharaoh's magicians declared that "This is the finger of God" On these grounds, Isserles rejects the widespread custom of performing the ritual with the pinky.

A different procedure was recommended by the great Kabbalistic master Rabbi Isaac Luria of Safed. He was opposed to the whole notion of dripping with fingertips, and insisted that the sixteen drops be poured directly from the cup. Other Kabbalistic teachers added that the liquid should be discharged into a broken vessel, a variation that has profound allegorical importance in Jewish mystical lore.

Another difference of opinion arose concerning the desirability of drinking the wine that remains after the drops have been removed. Rabbi Hayyim Vital reports that some celebrants were careful to rinse out the cup and avoided partaking of a beverage that had been associated with deadly plagues.

Other authorities, however, were quick to point out that it was the sixteen drops that had negative associations, and these had after all been removed. The remaining wine, for this reason, should be considered particularly wholesome and salutary.

And indeed, there were Jews who believed that there was exceptional virtue attached to the act of sipping the wine left over from the "plague drops" Drinking this potion was considered an effective charm for guaranteeing a prosperous year.

For a promise of such abundant blessings, it might even be worth risking a few wine-stains on your Passover tablecloth.

From the Sources by Eliezer Segal

Dip Before You Sip

by Deanna Neil
There comes a time during the course of the Passover seder, when some of us are inclined to take an admiring look at the sparkling white tablecloth, radiant with beautiful festival dishes and fancy silverware. And then we cringe. The occasion for this uneasiness is the anticipation of a picturesque custom in which we begin to trickle droplets of wine from our cups. Ideally, the dripping would be contained safely in a plate or other vessel. In the real world, however,...
Yachatz

by Deanna Neil
The Peach story begins in a broken world, amidst slavery and oppression. The sound of the breaking of the matza sends us into that fractured existence, only to become whole again when we find the broken half, the afikoman, at the end of the Seder. This brokenness is not just a physical or political situation. In Hebrew, Egypt is called Mitzrayim, reminding us of the word tzar, narrow. Thus, in Hassidic thought, Mitzrayim symbolizes the inner straits that trap our souls....
Bareich 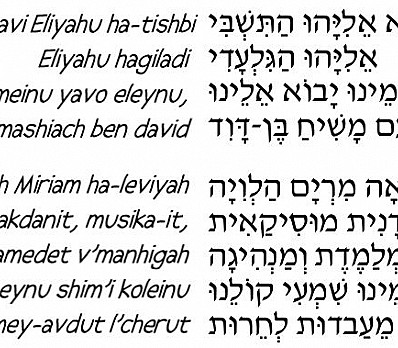