As we approach Berach and reflect and give thanks to God for the meal we recently consumed, let us pause for a moment and reflect on what a Jewish meal is.

Having a meal according to the Jewish tradition is much richer and more complex then just consuming food. As William H. Gass [1]  has noted, as animals we desire only nourishment. However, in the process of eating, other things happen. The desire to have food is replaced by the desire to taste food. To have a meal is to civilize our desire for food; meals are a marker for our humanity. This process, which Gass calls "stylization," is also the process of culture. Culture, though, is ethically neutral.

Part of having a Jewish meal is to eat according to the Jewish tradition. Jewish teachings about having a meal locate eating within an ethical register. How so? By forcing us to consider the kashrut of a food object, halachah stylizes our desire by telling us that we cannot eat everything that we want. The ethics of halachah announces itself in limiting my desire, my self-interest, my want of certain foods. It is a specific kind of training, of virtue, that ultimately translates into realizing the needs of another, of the Other. In keeping kosher, I make the stylization of eating into something normative.

Eating, though, involves more then just consumption: eating is having a meal. The Jewish tradition not only stylizes what I eat but also the nature of my meal. It not only tells me what food I can eat but what I have to do before I eat, what type of blessings I have to make, and the requirements of those blessings. It informs me that I need to give thanks after the meal: to berach, or bless, God for the food that God has graciously provided us.

It also stylizes how I eat, that I cannot eat like an animal. It goes so far as to tell me, to stylize, the topic of conversation at my meal. The Mishnah [Avot 3:3] relates that if three people have a meal without words of Torah it is as if they are feasting on the sacrifices of the dead, but if they say words of Torah then it is as if they eat at God's very table.

Perhaps, most importantly, halachah stylizes, or frames, the relationship between what I consume and those who produce what I consume, those who directly or indirectly work for me, those who serve me. One brief example: A mishnah in Bava Metzia [7:1] states that "when one hires workers where the custom is that they be fed, he is obligated to feed them; where it is that they be served dessert, he must serve them dessert." Emmanuel Levinas writes, in his commentary on this mishnah, that it "affirms the rights of the other person, the worker who finds himself in the inferior position. This position is dangerous to his freedom because he runs the risk of losing his freedom without undergoing any violence…This Mishna says that nothing can be bought and not everything can be sold; there are limits imposed on freedom in the greater glory of freedom and those limits concerned the material conditions of life, sleep and food." [2]  According to Levinas, this mishnah teaches us then that it is our responsibility as a community to make sure that those who serve us are not deprived of the basic conditions of life; or a recent application would claim that workers never lose their freedom because of their insufficient documentation; that they are always afforded basic dignities up to the point of being offered dessert. In this spirit Levinas writes, Judaism is "sublime materialism concerned with dessert." As we approach Barech, take a moment to think about the meal that you just consumed-the food you eat, how Jewish tradition stylized it, and the people who produced it-before giving thanks to God. 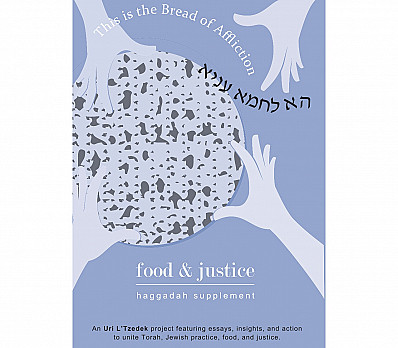 by Uri L'Tzedek
By: Rabbi Ari Weiss As we approach Berach and reflect and give thanks to God for the meal we recently consumed, let us pause for a moment and reflect on what a Jewish meal is. Having a meal according to the Jewish tradition is much richer and more complex then just consuming food. As William H. Gass [1]  has noted, as animals we desire only nourishment. However, in the process of eating, other things happen. The desire to have food is...
Commentary / Readings

by Uri L'Tzedek
One way to work in solidarity with the 50.2 million people that live in food-insecure homes is to support changes to the Farm Bill. The Farm Bill, which comes up for renewal in Congress every 5-7 years, funds much of the production of food in America. Contact your local member of Congress with these asks for the Bill's next iteration: 1.    Increase hunger relief programs. 2.    Support new programs like Access to Local Foods and school garden programs that encourage public...