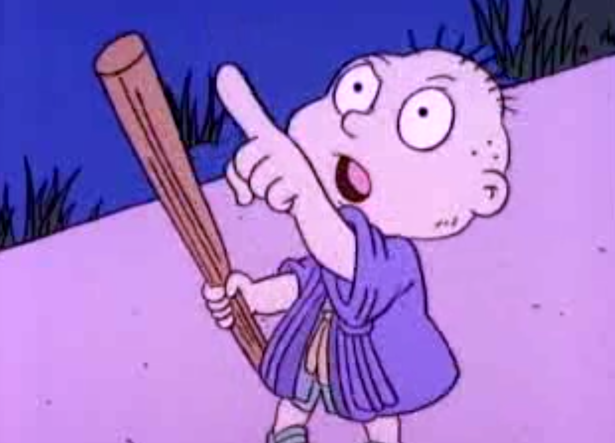 No list of Passover entertainments would be complete without this momentous film. To modern eyes, Cecil B. DeMille's retelling of Exodus may seem a little hokey. But the film boasts an all-star list of excellent actors, and the sets and on-location filming (in Egypt and Mt. Sinai) are genuinely impressive. What's more, its special effects (especially the parting of the Red Sea) earned it an Academy Award -- as well as a reputation as the most expensive film ever made at the time.

Rugrats isn't just the favorite TV series of many a '90s kid: it also portrayed the Jewish faith of the character Didi (and her son Tommy) with sensitivity and grace. In this episode, the show's babies find themselves trapped in an attic with Didi's father, Boris. To while away the time, Boris tells the babies the Passover story -- and the babies imagine themselves as part of the story. The episode won considerable critical acclaim, as well as the highest ratings in Nickelodeon's history.

The Prince of Egypt

This 1998 animated musical is another '90s favorite, and it retells the Exodus story with fun and flair. DreamWorks' stunning animation drew both critical and audience acclaim, and the film's cast consists of A-list talent like Val Kilmer, Michelle Pfeiffer and Ralph Fiennes. A pop soundtrack by composer Stephen Schwartz keeps things moving and grooving. Keep an ear out for Mariah Carey and Whitney Houston's "When You Believe," which charted in the U.S. and won an Academy Award for Best Original Song.

Sesame Street loves to teach kids about traditions from a variety of cultures, and the Shalom Sesame series focuses on sharing Jewish traditions with children who may not otherwise encounter them. In this special, Grover and his friends dash across Sesame Street, looking for horseradish to round out their Seder plates. Meanwhile, fun interstitials teach kids about the Hebrew alphabet and calendar, and various Passover traditions, including Mimunah. It's upbeat, educational and respectful, and a great addition to the Passover traditions of any family with little kids.