Bring a Famous Seder to Your Seder 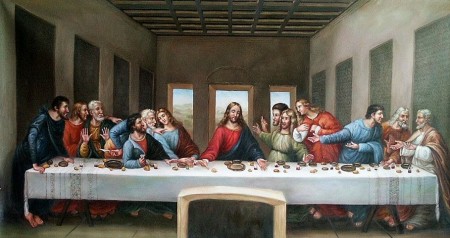 You’ve probably been to some pretty famous seders in your day. The year your toddler cousin accidentally head-butted your dad while searching for the afikoman, and you had to take your dad to the ER to get his nose looked at. The time the roast was completely raw in the middle. The time your uncle drank more than four cups and said some things you all regretted.

Throughout Jewish history, Jews have been having epic seders of all kinds. You may want to forget raw roast, but we’ve got some great clips that will help you bring the spirit of some famous seders to your seder. Here’s hoping that this year your seder will be famous for being so awesome.

Famous Because: Jesus led it (though it's debatable as to whether it truly was a Seder as we know it)

Clip recommendations: Spring, Time for Choices and Family by Rabbi Kerry Olitzky examines some of the ways we can approach an interfaith seder respectfully and thoughtfully, bringing many different traditions to one (seder) table

Haggadah and Liberation by Mark looks at the history behind the seder, and explains some of the different understandings of the Last Supper in both Judaism and Christianity.

Famous Because: The traditional Haggadah text uses this seder as the paradigm for all long seders—it lasted through the night til dawn

Clip recommendations: Seder in Bnei Brak by Daniel gives the historical context behind the epically long seder, explaining that its length was due in part to the rabbis using the ritual as a cover for some strategic planning they were doing to try to overthrow the emperor Hadrian. Sneaky!

Maaseh bBnei Brak by Bangitout.com is a smart alecky look at this seder, with plenty of rabbinic wisdom mixed in to boot. Why did all those rabbis come spend Passover with Rabbi Akiva? And why did the rabbis lie??

Famous Seder: The Last Seder in Warsaw before the Warsaw Ghetto Uprising

Famous Because: In just a few days the remaining Jews in the ghetto would put up one last fight before being shipped off to death camps by the Nazis

Clip recommendations: Yad Vashem has put together this poignant video that collects the testimony of a handful of survivors who experienced that fateful seder.

Shefoch Hamotcha by Rabbi Michael Lirner considers the Warsaw seder, and the ways that those in the present who choose to testify to the possibility of transformation become the focus of everyone’s anger and displaced frustrations, and eventually their murderous rage.

Famous Because: Just a year after Martin Luther King Jr. was assassinated, Jews and Africans American joined together for a seder to celebrate the freedom they fought for together, and to steel themselves for the journey to come.

Clip recommendations: Some video footage from the original Freedom seder still exists, and you can watch it with your seder. We especially love the emotional singing of “Let my people go.”

Texts on Social Justice by AJWS gives you a lot of great civil right and social justice sources to examine as a seder. What resonates with you? What’s the civil rights cause that you find yourself thinking about at your seder?