We pause in our celebration to remember the Warsaw Ghetto uprising, the Holocaust, and the ways that those in the present who choose to testify to the possibility of transformation become the focus of everyone’s anger and displaced frustrations, and eventually their murderous rage. Being a spiritual or moral vanguard is risky. No wonder it’s easier to assimilate into the celebration of money and cynicism about the contemporary world.

Tonight we remember our six million sisters and brothers who perished at the hands of the Nazis and at the hands of hundreds of thousands of anti-Semites — many of them Germans, Poles, Croatians, Ukrainians, Lithuanians, Latvians, Estonians, Romanians, Hungarians, Austrians — who assisted those Nazis throughout Europe. We remember also the Jewish martyrs throughout the generations — oppressed, beaten, raped, and murdered by European Christians. And we remember tonight with pride the Battle of the Warsaw Ghetto, and the tens of thousands of Jews who resisted, fought back, joined Partisan units, or engaged in acts of armed violence against the oppressors.

It is not fashionable to speak about these atrocities, particularly because some reactionary Jews use these memories to legitimate human rights violations against Palestinians — as though they were still fighting the Nazis, as though shooting Palestinians angered by expulsion from or Israeli occupation of their homeland could somehow compensate for our own failure to have taken up arms soon enough against the Nazi oppressors. Others use the violence done to us as an excuse to be insensitive to the violence done to others — as though our pain was the only pain — or to legitimate a general “goyim-bashing” attitude based on a total distrust of non-Jews. But though the memories of past oppression are sometimes misused to support insensitivity to others, it is still right for us to talk about our pain, what was done to us, how unspeakable, how outrageous.

Permitting ourselves to articulate our anger — rather than trying to bury it, forget it, or minimize it — is the only way that we can get beyond it. So, tonight it is appropriate to speak about our history, about the Holocaust, and about the ways that the American government and peoples around the world failed to respond to our cries and our suffering. What was done to us was wrong, disgusting, an assault on the sanctity of human life and on God.

It is with righteous indignation that Jews have traditionally called out “Shefokh Chamatkha ha’goyim aher lo yeda’ukha” — pour out your wrath, God, on those people who have acted toward us in a way that fails to recognize Your holy spirit within us as it is within all human beings. Tonight we reaffirm our commitment to the messianic vision of a world of peace and justice, in which inequalities have been abolished and our human capacities for love and solidarity and creativity and freedom are allowed to flourish, in which all people will recognize and affirm in each other the spirit of God. In that day, living in harmony with nature and with each other, all peoples will participate in acknowledging God’s presence on earth. We remain committed to the struggles in our own time that will contribute to making that messianic vision possible someday.

Do not say that we have reached the end of hope
Though clouds of darkness makes it hard for us to cope
The time of peace, justice and loving is still near,
Our people lives! We proudly shout that WE ARE HERE.

WELCOMING THE POSSIBILITY OF THE MESSIANIC AGE

We open the door for Elijah — the prophet who heralds the coming of the Messiah and a world in which all peoples will coexist peacefully — acknowledging the Image of God in one another. To deny the possibility of fundamental transformation, to be stuck in the pain of past oppression, or to build our religion around memories of the Holocaust and other forms of suffering is to give the ultimate victory to those who oppressed us. To testify to God’s presence in the world is to insist on shifting our focus from pain to hope, and to dedicate our energies to transforming this world and ourselves. We still believe in a world based on love, generosity, and openheartedness. We continue to affirm the Unity of All Being.

Now let us build together a communal vision of what messianic redemption would look like.

Blessing over the fourth cup of wine. 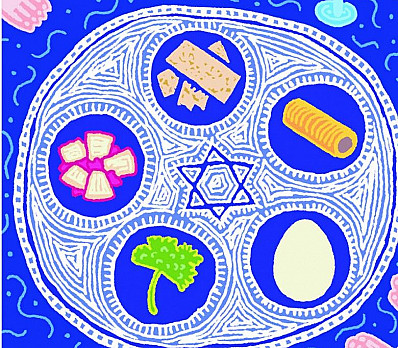 by Rabbi Michael Lerner
Unfortunately, we in the Jewish world have another major challenge. We have to face the set of distortions that have accompanied a blind and idolatrous worship of the State of Israel — distortions that are apparent whenever Jews close their eyes to the suffering of our brothers and sisters, the Palestinians. Go into most synagogues or Jewish institutions in Canada, the United States, the United Kingdom, Australia, or France, and you’ll find that you can denounce God, question the Torah, or...
Commentary / Readings

How We Find Security

by Rabbi Michael Lerner
What is really needed is a revolutionary transformation in our way of thinking and in our economic, political, and social arrangements. America will find security when it is perceived by the world as caring not merely for its own well-being, particularly that of its most wealthy citizens and global corporations, but genuinely for the well-being of all of the people on the planet. Instead of relying on domination, we know both from our holy texts and from our real-world experience that...